If my life was a movie, my sister Geneviève would be the kind supporting character played by Ingrid Bergman. My sister Alicia would be the comic relief played by Sandra Bullock. And I would be the slightly eccentric (but smart and assertive!) heroine played by a young Judi Dench. Because this is my blog and I say so. 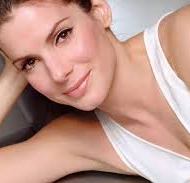 With that cast, it would be among the most bizarre, most quirky movies Hollywood has ever made. But think about it — you’d want to see it.

That happy disjointedness is perfectly representative of my relationship with my siblings. It may seem like we don’t go together, but we do. We have little in common, but somehow it works. In fact, our differences make us interesting.

Until April, my sisters and I hadn’t spent two weeks in the same town in nearly a decade. So it’s been wonderful and strange to have them both so near.

We’ve enjoyed impromptu weeknight sushi dinners and leisurely weekend breakfasts. Last week, we toasted Alicia (a.k.a. Leash, Leashy-babe, or Monkey) as she celebrated the beginning of her 27th year on this earth.

As the eldest, it pains and delights me to see how adult and graceful(ish) they’ve become. Especially since they were both little hooligans, once. Geneviève was an early nudist whose favourite hobby was hanging her dolls’ laundry in the back garden. Alicia spent her summers happily digging deep, muddy holes with her Tonka trucks.

Us, in our early awesomeness.

I’m so proud of their grown up selves and regularly find myself choking down advice. At 26 and 19, they hardly need it.

In a few months, Geneviève (a.k.a. Gen, Miève, or Mièvy-boo) will be back to guzzling Starbucks with the rest of Guelph U’s student population. Until then, I’m going to soak in as much double-barreled sib time as I can. Bring on the obscure board games (Ninjato! King of Tokyo! Pandemic!) and Lord of the Rings marathons.

2 thoughts on “Summer of sibs”