My avô (grandpa) died a few weeks ago. I loved him very much, so I’m still quite sad. 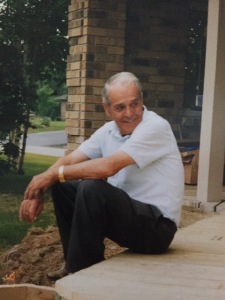 This is my grandpa, Dinis Rebelo. Wasn’t he handsome?

The end of his life was hard. He spent five years in a dementia ward. I still can’t bring myself to say his death was a blessing, but I’m glad he’s free of that place.

When he first got there, he walked around confused, running his hand against the wall and staring at all the blank people. With time, he became one of them. He lost the ability to walk, forgot our names, and stopped feeding himself. I cried the first time I watched him read the Toronto Star upside down.

Alzheimer’s is a cruel disease. It robs people of dignity, history and identity – three things that were vitally important to avô.

I prefer to remember him as he was most of his life: proud, handsome and sharp as the tools in his garage. He was a farmer, winemaker, Maple Leafs fan, devout catholic, carpenter, volunteer and family man. You can read more about him, if you’d like. 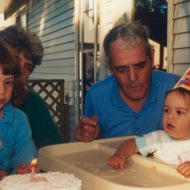 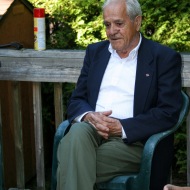 A year or two before he went to the senior’s home. 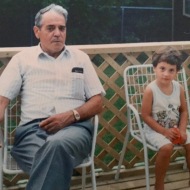 Me and avô. I thought he was pretty cool.

My grandparents with my mom and uncles, David and João. 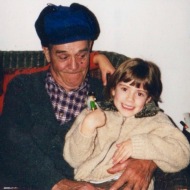 He loved children. Here he is with my little sister, Geneviève. 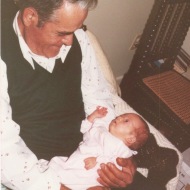 In his homeland, the Açores. His last visit there as a healthy man.

Selfie! I think we kind of look alike.

For over ten years, avô was our neighbour. He helped my grandma care for us after school. In my gangly years, he drove me to basketball and picked me up after piano. He was at my recitals, tournaments and graduations. In many ways, he was another parent.

I was going to write a post about all of the happy things that have happened lately. There have been many! But somehow, that just didn’t feel right. My grandpa lived life well. I needed to acknowledge that – and him – first.

If you have potent red wine or beer on hand, fill a tumbler to the brim and toast Dinis Rebelo. He was a good man.

Here is my grandpa serving alcohol – as he always did when there were guests.

Well, it happened. Nine and a half years after our first date at Festival du Loup, JF asked me to marry him. We’re excited and happy. And slightly terrified at the prospect of planning a big, boozy, Lafontaine-style party.

This is us, right after he asked me.

A lot of people are surprised at this news. I was too! For years I hoped – but didn’t expect – to officially commit to the world’s handsomest Franco-Ontarian engineer.

Before you ask, yes I thought of proposing to him. But I wanted him to want to get married, and uncertainty meant waiting. Which, when you’re with the world’s handsomest Franco-Ontarian engineer, isn’t so bad, really.

Just look at how handsome he is. xo

In any case, he timed his proposal beautifully. We were in the lush gardens of a Portuguese castle, by a waterfall. The sun was setting. We’d spent a lovely week in Lisbon together. We were relaxed and full of delicious custard tarts. 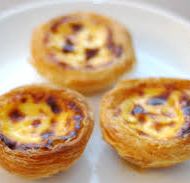 Here are the custard tarts.

The proposal, however, was a bit more authentic. He was wearing his ugliest toque. We were walking up a big hill, so I was sweating and wheezing. I had to pee. As we swung by the waterfall, JF grabbed my hand and said: “so pickle, wanna get married?” I was confused, so he added (for clarity): “wanna get married soon?” 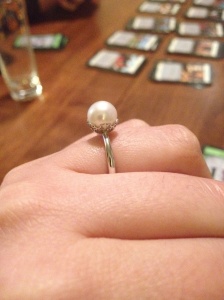 I laughed, then hugged him and cried. Then – in true JF fashion – he gave me a spreadsheet of ring options. We settled on a simple and pretty pearl, or, as I’ve come to think about it, shiny clam poop.

When I told my avo we were getting married, she said: “that’s nice – and it’s good for the one up there” (she pointed to heaven) and then continued to discuss her arthritis.

That about sums it up. It won’t change much, but it is nice. And it’ll be lovely to have people —friends, family, government, and sure, God—recognize that we’re pleasantly stuck together for life.

Another one of us in Portugal, just for kicks. 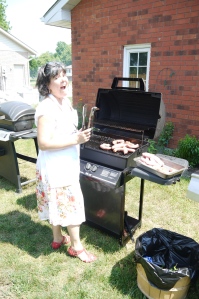 My mom, cooking as usual

My mom houses me when I’m homeless, points the way when I need direction, and cares for me when I’m sick. Last week, when I was feeling overwhelmed by the weeds in my garden, she and my avo spent an afternoon cleaning my yard.

Maman is one of those unsung heroes of the world. She quietly, but efficiently, fundraises for charity, volunteers at community events, and excels in her work — all while keeping a meticulous house, exercising regularly, making deliciously elaborate meals, socializing with her Manhattan-sized network of friends, and beautifying the universe with her impeccable taste.

Sometimes it rankles to know that my mother is, and always will be, infinitely cooler than I am. When I was in high school handsome young men I liked would tell me they had a crush on her. Talk about your classic chopped liver.

Classic Mikaela and mom, circa 1985

But mostly, I’m just grateful that some miracle resulted in her giving birth to me.

One of my goals in moving from Toronto to Simcoe County was to spend more time with family. And when I picture my family, my mom is always at the centre.

Just a year ago, a weekend in Midland meant slogging through cottage country traffic, cramming in visits with friends, eating mom’s food, then schlepping back to the city to crash. Last night, a Tuesday, I had her and some friends over for a casual and decidedly unhurried dinner. Radical.

It’s sad that we only carve out one day of the year’s 365 (or 0.3%) to express gratitude to moms — so often the most amazing people, and the most taken for granted.

So here’s to mothers everywhere. But let’s face it, mine’s the best.

Mom and I, last year

My grandma. Her name is Micaela and I was named after her.

Ask my Portuguese grandma how she’s doing and her response (delivered with a thick
accent) will almost always be one of the following:

Hardly cheerful, but certainly honest. I wish I had the license for brutal truth telling she currently carries in her giant, practical black purse.

When she was visiting her hometown of Algarvia a few years ago, she ran into an acquaintance on the way to church. He was bent over with old age and barely able to walk. She said to him: “You’re still alive? If I had your health I’d rather be dead.” He passed away later that week.

That kind of earnestness can be tough – especially when directed at me – but I wouldn’t trade my avò in for a hundred ladies of Fatima.

Until I was about 14, I’d go to her house in Perkinsfield every day after school with my sisters. She’d serve us bean soup, giblet stew, bacalhau or shake n’ bake – always with a side of homemade bread and practical advice, washed down with coca-cola.

Avò, my sister Alicia, and my cousins Priscilla and Nathanael. Oh, and a baby bathtub full of dough.

After eating twice our weight in her immaculate kitchen we’d watch Sailor Moon from her floral couches and play backgammon with our uncle John (a.k.a. João). Then she’d bundle us up, kiss us on the head, and send us across the yard to our house so we could get ready for bed.

Avò always says that family is the most important thing. When I think about how much she’s done for me, it’s clear she lives by that affirmation.

Spending time with my grandma today reminds me of the deep tunnels my family has dug into my heart. Some memories are etched onto my brain forever, squished tight against some kind of giant, pulsing affection node.

Love like that can never hold a stain or wrinkle – kind of like her table linens. So even though I no longer eat giblet stew, I’m grateful to be able to drive 15 minutes to her place for a cup of tea and a story about the old country.

I think we look alike, don’t you?